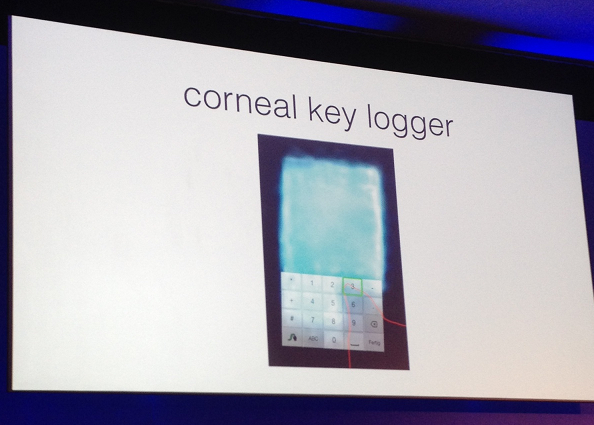 The German researcher Starbug, has demonstrated that it is possible to extract everyone's smartphone PIN code from any selfie "image," is biometrics secure?

The German researcher Jan Krissler, aka Starbug, has demonstrated that it is possible to extract everyone's smartphone PIN code from any selfie "image" ... and much more!

Jan Krissler is a popular hacker, he was known because he hacked the Apple's TouchID and recreated the Germany's Defense Minister Ursula von der Leyen's thumbprint from a high-resolution image that he combined with other photographs to compose the final print.

Starbug and his colleagues have extracted the reflection of smartphone screens in the eye whites of "selfie" subjects, then they used an ultra-high resolution image techniques to extract the user's PIN code.

Starbug presented his discovery at the Biometrics 2015 conference in London, the experts also revealed a method to take from long distance the iris images by using a high-resolution camera and recreate them using a common laser printer.

The expert showed how to use this technique to retrieve the German chancellor Angela Merkel's iris data by using a photo taken at a press conference. He confirmed that it is possible to extract the iris data also working on a high-res image from a magazine. Once extracted the iris data, the image could be printed onto a contact lens and it is possible to use it to bypass biometric authentication systems.

Starbug confirmed that fingerprint and facial technology still suffer this kind of issues despite they represent "90% of the biometrics market value."

"Everything is spoofable," Starbug declared.

The expert was able to obtain the astonishing result with a digital SLR camera equipped with a 200ml lens, he explained that it is possible to take fingerprints that can be replicated from a distance as happened in the case of the German Defense Minister's thumbprint.

When dealing with fingerprints, there are similar risks and the images taken from a distance could be used to build an ultra-thin dummy fingerprints that can be used to defeat this kind of biometric technology

"I can fool every fingerprint sensor in two hours", claimed the researcher.

Speaking about facial recognition, Starbug explained that a simple photo of the users face is enough to bypass authentication systems.

Starbug also outlined a method to bypass liveness detection that demands that makes users blink, and he closed his presentation defeating a 3D facial recognition by using a papier mache mask.

Starbug demonstrated that biometrics must be still improved, but he is sure that this is the future of the authentication.

Just for curiosity he admitted using Apple TouchID every day.