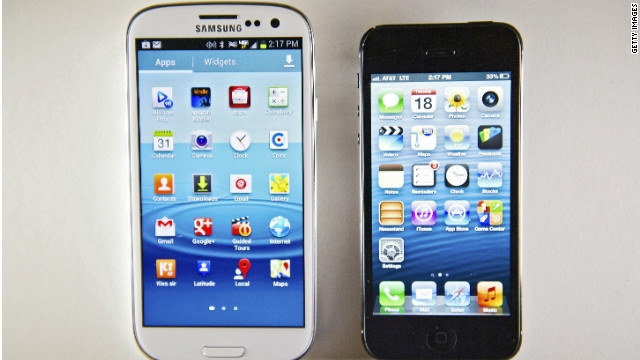 Android continues to dominate in the battle to be the top smartphone system in the world, thanks in part to Samsung, which reigned as the top phone manufacturer for 2012.

Android grew its already significant chunk of the smartphone market to 68.8% last year, while Apple's iOS operating system stayed comfortably in second place with 18.8% of smartphone shipments, according to new stats from research firm IDC. Together, the two operating systems accounted for 87.6% of all new smartphones in 2012, leaving struggling competitors BlackBerry and Windows far behind.

It's no surprise that Android has surged so far ahead of iOS. There are are thousands of Android handset models in every size and at every price imaginable, while Apple has released only six versions of the iPhone. Apple sold 130 million smartphones last year, according to Gartner.

"Even with the Apple Maps debacle, iPhone owners were not deterred from purchasing new iPhones," said IDC research manager Ramon Llamas in a statement.

Apple released one new iOS phone in 2012, the much-anticipated iPhone 5. However, according to Gartner it was previous iPhone models, which dropped in price enough to make them a more appealing option in emerging markets, that accounted for much of Apple's smartphone success. Even though Apple's sales are growing, IDC points out that its year-over-year growth is actually slower when compared with the rest of the smartphone market.

Samsung sold 384.6 million phones in 2012, only 53.5% of which were smartphones, according to Gartner. Chinese phone maker Huawei climbed to the No.3 smartphone vendor spot in the final quarter of 2012. Nokia has been struggling and 2013 will be a key year for the company. Its fate is largely tied to that of Windows Phone 8, which runs on Nokia's latest Lumia phones.

Both BlackBerry and Windows are compteting to win over smartphone customers with their new offerings. BlackBerry just released its long-awaited new smartphone operating system and two new handsets in January, and Microsoft debuted its Windows Phone 8 update at the end of 2012. BlackBerry must persuade its existing users to make the upgrade and win back some large companies, which were previously its biggest customers.

Unlike BlackBerry, Windows Phone 8 unveiled its new products and marketing campaign early enough to make some progress last year. Though it only made up 2.6% of the smartphone market in 2012, it did grow its number of shipments an impressive 98.9%, according to IDC. BlackBerry plummeted 36.4% from the previous year, but we'll have to wait and see how its latest products do in the fresh year.

Overall, the number of phone sales in 2012 actually dropped 1.7% from the previous year, the first drop since 2009.