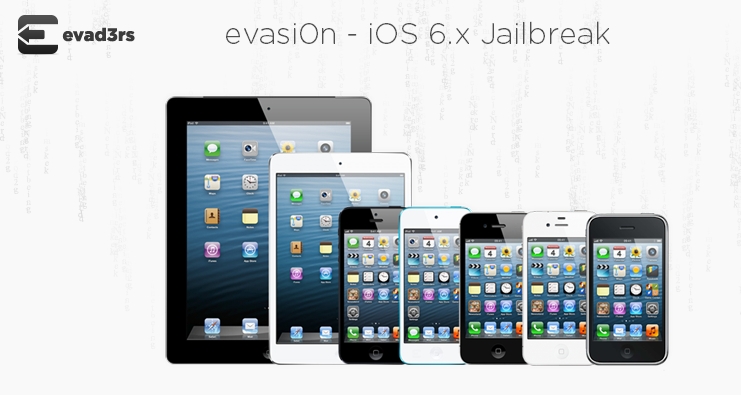 An untethered jailbreak for all models of iPhone and iPad running 6.1 has been released by the Evad3rs team and is available now for use on Mac OS X, Windows and Linux.

The jailbreak is untethered, so only needs to be performed once and will remain in place after the device is rebooted; it is compatible with all models of iPhone, iPod touch, iPad and iPad mini running iOS 6.0 through to iOS 6.1. Click here to download the tool

The Evasi0n jailbreak software requires a minimum of Windows XP, Mac OS X 10.5 or Linux X86 / x86_64, a USB cable to connect the to your computer, and around five minutes to run.

Before jailbreaking, it is important that users complete a full backup of their iOS device using iTunes or iCloud to avoid the risk of losing anything should the process fail.

Users should also disable the lock passcode of their iOS device before using Evasi0n, although it can be reactivated once the jailbreak is complete.

Finally, the Evad3rs team say that, if the process fails or gets stuck, then it is always safe to reboot the device (press and hold Power and Home buttons until you see the Apple logo) and restart Evasi0n to rerun the jailbreak.

It was originally thought that the jailbreak would be released on 3 February, but the team later confirmed on Twitter that it would arrive a day later: "Final count down toward tomorrow's release has begun!" the team tweeted.

Jailbreaking is the name given to making an iOS device run applications other than those available on Apple's App Store. It also gives the user deeper access to the operating system, letting them change the design of iOS (fonts, colours etc), delete Apple's own applications, and install any other apps they want.

The late Steve Jobs described jailbreaking as a "cat and mouse game", as Apple fought to update iOS and prevent jailbreakers from gaining unauthorised access.

A jailbreak for iOS 6 has been a long time coming, with Apple releasing the software update back in September, followed by four months of trial and error by jailbreakers, who eventually combined their efforts to form the Evad3rs group; previous iOS updates had been jailbroken in a matter of days or even hours after they were released.

iOS 6 brings Siri to the iPod touch and iPad range for the first time, along with an update to include sports results and cinema showing times in the personal assistant's results.

There is also Passbook, an app to store membership cards, tickets and boarding passes, an update to bring Facebook and Twitter integration to the Notification Center, and an entirely new Maps application.